Pea Vs. Hemp Protein Powder: Which Is Better?

Both hemp and pea are rich sources of protein and other nutrients. So, how do the derived protein powders compare – and which is better?

Far from being products just sought by vegans and vegetarians, both are becoming increasingly popular as more people look for alternative protein sources to meat and dairy products; or those just seeking to reduce consumption of either/both. Each is also popular with athletes and body-builders for helping to stay in tip-top condition.

Isolated pea protein has been around for a very long time and has made its way into many products. It has become so commonly used in processed foods, you could have eaten it today and not even know it.

Pea protein is prized as it contains all amino acids except for methionine. But out of the 20 amino acids we need, nine are considered essential and pea protein has all of these; so it is considered “complete”. Additionally its overall protein content is very high – up to 90%, depending on the powder product. Other nutritional positives include vitamin B6, iron, zinc and choline. It’s also comparatively low in carbohydrates (although carbohydrates aren’t necessarily a bad thing).

You can learn more about pea protein and how it’s made here.

Hemp protein contains all of the essential amino acids, so it is also considered a complete protein source. But beyond that it contains all 20 amino acids, is rich in fibre and fatty acids including omega 3, 6 and 9; along with other important nutrients such as zinc, iron and magnesium.

While we don’t wish to boast (well, we really do), the highest protein content we’ve seen in hemp protein powder for sale in Australia is Byron Bay Labs’ own Nourish, at 63%. It’s a good idea to compare hemp protein powders as some can be comparatively quite low – meaning you need to consume more for the same benefit.

Another major plus for hemp is its fibre levels, which is much higher than pea. While hemp protein powder has more fat than pea, the majority is unsaturated fat, which is very good for heart health. The carbohydrate level of hemp is lower than pea, handy for those watching their carbs intake.

You can learn more about hemp protein powder and how it’s made here.

Sodium is important in a diet, but it’s something many Australians consume far too much of – to the detriment of their health. Too much sodium can cause high blood pressure, heart disease and stroke. Australia’s Heart Foundation recommends 5g of salt (2000mg sodium) as a daily maximum amount, but states most Australians are consuming roughly 9g of salt a day.

If you’re keeping an eye on sodium intake, hemp definitely wins out. Using the Nourish example again, a single serve (25g) contains just 8.1mg of sodium, while 25g of pea protein powder can be up to 350mg – more than 40 times that of hemp!

The Verdict: You Can Benefit From Either – Or Both!

So, which is better? This would really depend on what your nutritional goals are as pea and hemp are both superstars of the plant-based protein world.

Each has their own positive attributes, but it doesn’t have to be an either/or situation. Here at Byron Bay Labs, we offer a range of products containing both pea and hemp protein (Immune, Vitality and Strength) so you can experience the best of both worlds. Or if you have a preference for hemp protein only, check out Nourish.

To help you “compare the pair”, the tables below show a side-by-side nutritional comparison of Byron Bay Labs’ Nourish (hemp) and Strength (hemp + pea) protein powder products. Our Immune and Vitality products also have the additional nutritional punch of Australian native superfoods. You can learn more about all the major ingredients in Byron Bay Labs’ premium hemp products here. 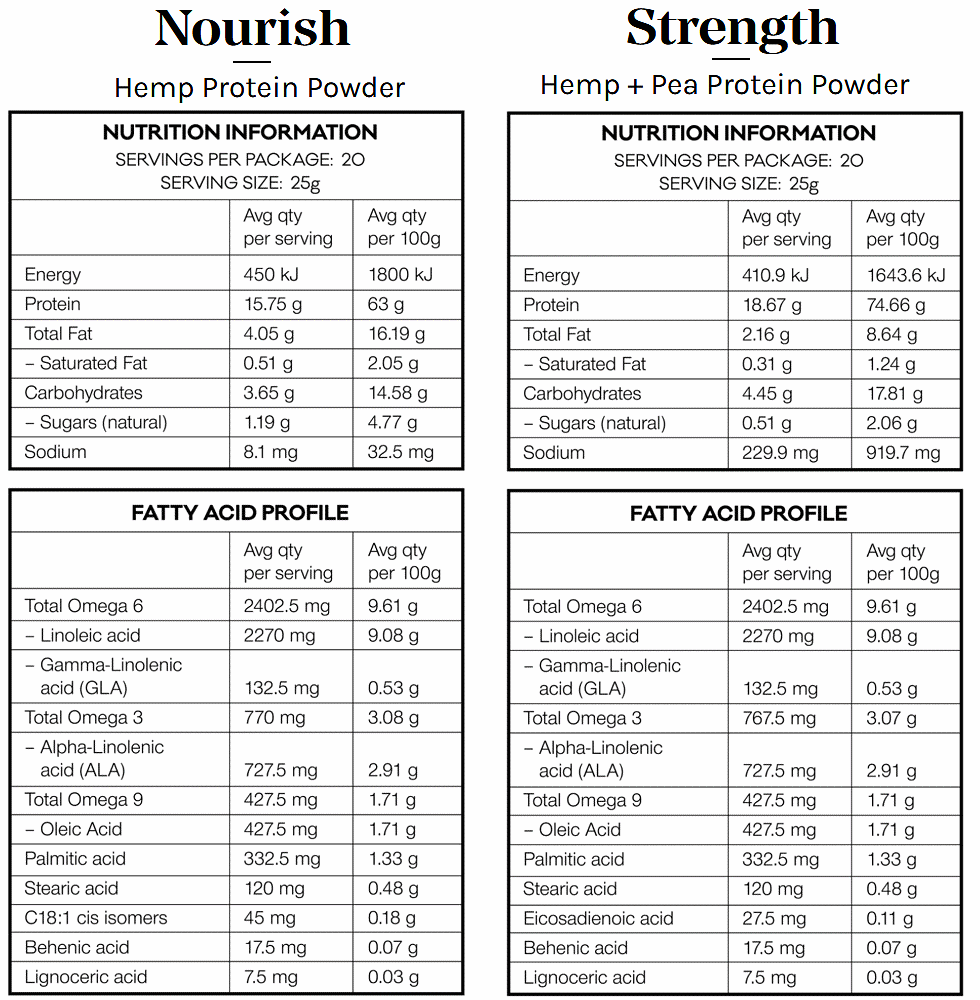